Mr. Bedřich Grosz bought a plot of land No.240/2511 in na Piavě street in Bubeneč from the six original owners, which were the Nebrich married couple, the Sojka married couple, Mr. Ing. Dr. Polívka and Mrs. Elsa Müllerová on June 26, 1929. Na Piavě Street was renamed several times during its existence: Hötzendorfova (Austro-Hungarian field marshal), Sverdlova (Soviet Party and state official, organizer of the October Revolution) and finally the strret was named after Charles de Gaulle, French general and statesman2.

The construction of the villa for Mr. Grosz, head alderman of the commercial board, was allowed on July 7, 1929, and in less than a year, on June 12, 1930, a notice was given of the completion of the construction. The construction was carried out by Ing. Dr. Jaroslav Polívka. However, it is reasonable to assume that at least some parts of the building were designed by architect Fridrich Ehrman, a profesor of German Technical University in Prague3.

The villa with a basement, two floors and its attic is situated on a plot with a garden. The construction system is brick, the truss system is wooden. In the original layout developed for the Bedřich Grosz family the house included a garage, a laundry room, a boiler room, a cellar and a housing unit for the caretaker in the basement. On the ground floor there was a hall, lobby, a master room with veranda, a dining room with terrace and a kitchen with preparation and facilities. The floor provided space for four bedrooms of members of the Grosz family and accessories (bath, two toilets and washroom). The bedrooms also had spacious terraces.

Wits its expression, the villa is close to the buildings of conservative modernism, which also corresponds to the solution of facades or details. In this context, we can mention, for example the windows linigs, the dormers and terraces solution or small details of retaining walls and railings. 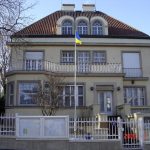 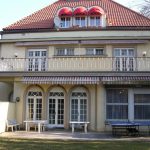 History and use of the villa

The villa was confiscated from the sole private owner, Mr. Bedřich Grosz, with effect from 19 February 1941, for the purpose of transfer to the German Empire. After the end of the World War II, on the basis of Decree of the President of the Republic No. 5/1945 Coll., was marked at the building by the national administration and on July 2, 1953, the ownership right for the Central National Committee of the Capital City of Prague was entered in the land register.
The villa was used by Klement Gottwald´s daughter Marta, who was later married Čepičková, until 1976. Later, the house was handed over to the Services Management of the Diplomatic Corps in Prague, whose successor organization is the Diplomatic Service. The lessee of the villa was the Embassy of the Islamic Republic of Afghanistan, Embassy of the Swiss Confederation, and since 2003 the villa has been used by Embassy of Ukraine.